An interview with LAUNDRY DAY

The New York quintet talk exhaustion from touring, the passage of time and leaning on one another above all else 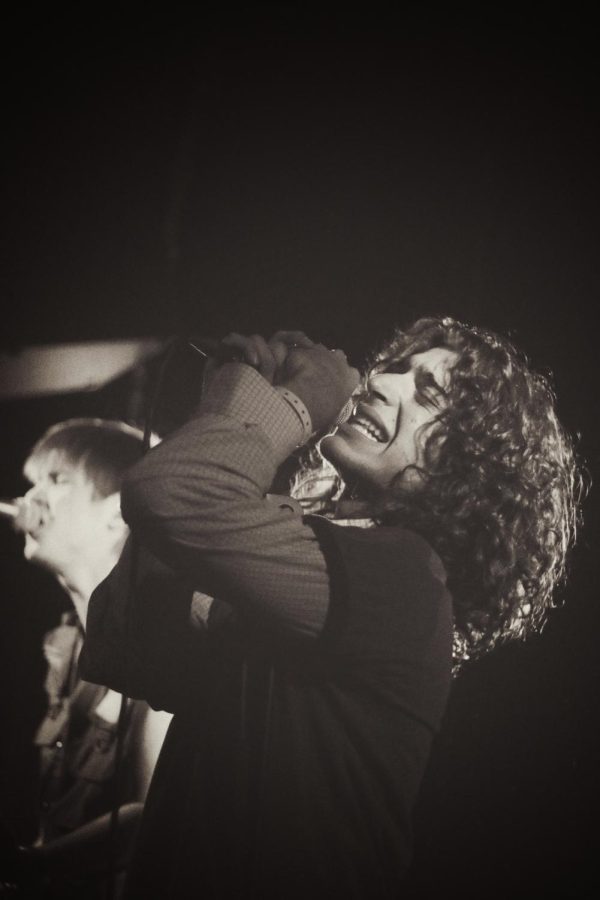 Gathered around a table at the Middle East in Cambridge sat a group of five boys, eating chicken, talking about their love for Summer Walker’s discography — oh, and preparing to perform at the sold out, second-to-last stop of their North American tour. If not for the line of eager fans outside, desperately craning their necks to get a look at the band through the windows of the restaurant/nightclub, one would assume they were merely a group of regular young men enjoying a simple dinner before their night out due to their warm humility. LAUNDRY DAY’s humbleness and clear appreciation for everything they have achieved shows itself in the minor ways they move, from an earnest “thank you so much, sir” to the waiter to chatting with passionate fans in the crowd before they hit the stage.

“The four people in the world that I trust the most are making the exact same decision and have as much faith in me as I have in them,” said bassist Henry Pearl. “So, I live without fear now, because of that.”

By the time Sawyer Nunes, Henry Weingartner, Henry Pearl, Etai Abromavich and Jude Lipkin graduated from high school in Hell’s Kitchen, New York, they had already toured with The 1975, sold out various venues and released multiple bodies of work which amassed die-hard fans worldwide. But the question of college still remained.

As any artist knows all too well, sacrificing a calculated future to throw oneself into the fickle unknowingness of pursuing one’s craft may be one of the most jarring experiences — especially for a group of 18-year-olds. Luckily, LAUNDRY DAY found solace and wisdom in one another, understanding that what they shared together was far too special to not give their 100 percent.

“We’re so much more confident in being able to lean on each other,” Lipkin said. “The path that we’re on in our lives, it’s so distinct. Especially at our age, the deeper we get into it — the more shows we play, the more music that we make, the more weird experiences we’re having along the way — the less I feel like I can relate to anyone else. And I think we’re all kind of accepting that more and holding hands through it all.”

As we sat in the middle of the buzzing restaurant, on the 30th day of their “We Switched Bodies” tour, it was evident that every choice the band has made thus far, to get them where they are, paid off trifold.

Released in February 2022, “We Switched Bodies” is the fourth studio album from the New York natives. The project unravels sentiments of trust, brotherhood and the foreboding passage of time.

“I think that’s all we really write about,” said Lipkin, regarding fear of time passing. “At this age, we’re still kind of going through that phase of kind of turning into a new person every year. I think every album has almost been a different version of ourselves. Obviously, as we changed, we’re still us at the core — you can hear that in the music.”

The foundation of LAUNDRY DAY’s sound has centrally been built on apprehension regarding time, and the change that forces growing up. Yet the band welcomes this change with open arms, knowing they are far too young and far too talented to stay stagnant in their music. For LAUNDRY DAY, change is quintessential every step of the way.

This passage of time may be perfectly encapsulated in the album’s second track, “Little Bird.” When making the song in 2020, the group had just graduated high school, COVID-19 was at its peak and all they truly had for themselves was the ability to ponder the passage of time. The group was living in a house together in upstate New York, attempting to create the perfect album, which would eventually take two years to be completed. They attempted new methods of recording that they had never explored before and had many conversations about which track to take in which direction. Despite their efforts they were still feeling lost — a feeling which ironically proved to be the missing ingredient.

“We made a song the next day about that conversation that we had about feeling frustrated with all these things that we had waited for so long to come up, and just working on that communication,” Nunes said. “The beginning of the album is a lot more angsty. Then, as we get towards the end of it, there seems to be a sense of reconciliation and an idea that after the turmoil, there’s working together and coming together.” 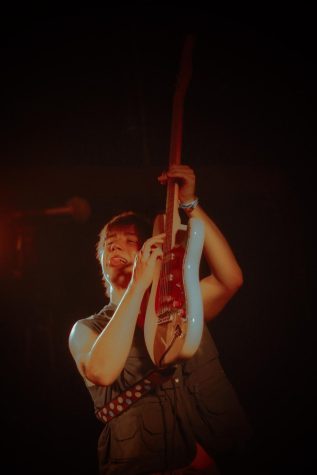 All 10 tracks on “We Switched Bodies” were perfectly curated to represent plot points in the group’s life. While one song represents a time where they were really down, another flows with the ease that oftentimes comes to them naturally.

“They all center around us and the passing of time, we’re the central characters of our own music,” said Nunes with a sheepish laugh. “That sounds selfish.”

LAUNDRY DAY is one, synergetic brain. What one member said, the other was already feeling. This unintentional, paralleled mirroring of one another was amplified in the insular experience that came with recording during the pandemic.

“Whatever you felt, you knew that everybody else was feeling, too,” Weingartner said. “When we were writing a song like ‘Little Bird,’ there was almost this feeling of ‘I’m scared, and I know that you’re scared. I know that everything that I’m feeling you’re feeling too.’ It’s one symbiotic experience, even though you’re not all on the same page.”

Before the pandemic, LAUNDRY DAY was on a hot streak, riding the high of their newfound success in the industry. A chain of shows, press and constant music releases allowed the group to feel as though they were working towards something that would bear its fruits to them in due time. If you start your music career with as much of a powerful punch as the group did, however, it is without question that critics, fans and anyone that knows your music will have expectations of you.

“When you’re trying to create something unique and precious, something that will last for a long time, it takes work. It takes a long, long time to make something that you’re proud of,” Nunes said. “We’re so happy that we got to a place where now we can constantly be like ‘this is unlike anything else and, like, we spent two years making sure of that.’” 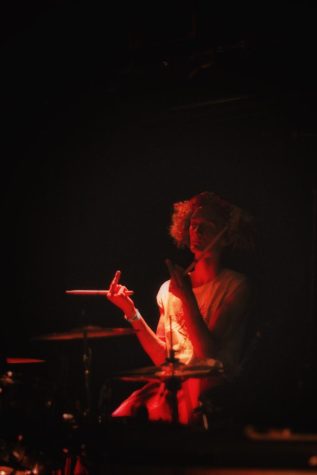 The band had initially solidified their status as genre-bending, with a sound unlike any other — a status that LAUNDRY DAY affirmed to themselves they would hold. Yet, to create something unique enough to be remembered, to be talked about, a lot of hard work must first go into it.

“We were trying to tackle a lot of big things, and trying to do things very differently,” Nunes explained. “We found the most truth in just trying to speak for everybody and not getting too out of our league  — it just took a while to figure it out.”

Making the album felt passive for the band, as if it were two years of waiting for something to happen. And with five young men whose energy is extracted from doing rather than waiting, nothing could be more grueling.

“In the same way that I was so mentally fatigued by that process, this crusade that we’re on takes an enormous toll on you too,” Abromavich said. “It’s the greatest gift in the world, but it’s also no joke.”

Abromavich said that just that morning he woke up incredibly sick, yet felt far too huge of a responsibility to their audience to not put on the best show he could muster.

“Everyone who’s coming to see us, we just owe our best performance,” Abromavich explained. “In a certain way, the two years that we spent working on this album have to culminate in this hour of music that we give them, which is a lot of pressure but is also very freeing.”

To tour for adoring audiences, to make a living doing what you love is what every artist dreams of. Yet no one truly talks about how exhausting it can all become, and how little time you’re allowed to even process your exhaustion before it’s on to the next show.

“As kids we were so wide eyed at the whole thing, you don’t realize how much work it really is,” Nunes said.

“I feel like I’ve been through a massive life journey. And that’s what’s really fun about it, you feel like afterwards, you’ve just been like birthed into a new body because you don’t remember anything from the past month,” he continued. “Yet, you have this wisdom and all this knowledge that you’ve picked up.”

The group leans on one another for strength, comfort and inspiration. From exhaustion off-stage, to writer’s block, to someone that will listen to them about how tired they are on the tour bus, it is evident that the members of LAUNDRY DAY are five best friends before anything else. 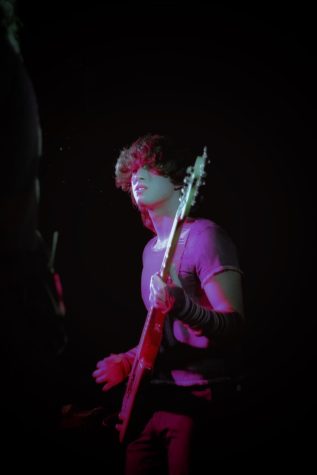 “The chemistry when you’re on stage together is this unspoken thing that takes it to a whole other level,” Lipkin explained. “Being in front of these fans that have really shown this real, real love for the music not only builds our confidence, but I think also strengthens our love even more, because it’s like, we’re doing something really special.”

None of them could have imagined that what had started off as an inside joke in 2018 could turn into an irreplaceable trajectory in the quintet’s lives.

“We would make fun of people when they pulled up in sweatpants to school, our whole friend group would say to each other ‘yo is it laundry day?’” said Lipkin with a chagrin. “Such a stupid joke, I’m most embarrassed that we were making fun of people.”

It was their first inside joke, and the weight of the high school jest merely became amplified when the conversation of band names arose.

“The band was fully a band already and we were like, ‘what is our name?’” said Lipkin. “The conversation started with, ‘do we have any inside jokes that we can use?’ It’s kind of cool that that’s where our brains went.”

LAUNDRY DAY. Merely a few short years later and the name holds unassailable weight. The group makes music for the future, music that will last long after they are gone. The type of music that is passed on from generation to generation, part of a progression much larger than a singular act. 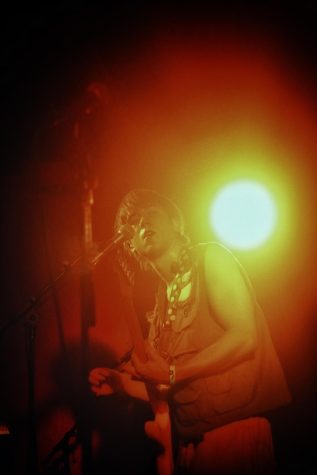 “I want there to be music after us, that’s hopefully inspired by us,” Pearl said. “We took what was before us, and now I want people to be able to do that with us.”

The band does not merely want to be remembered for their music, though the creative focus of LAUNDRY DAY stretches out way past their sonic abilities. The group looks to make their own films, TV shows and even create a LAUNDRY DAY clothing line. Sprinkling their creative vision into every sphere of the artistic realm is a goal the group is chasing fervently. Yet, regardless of what they are pursuing in the moment, or what show they are playing in which city, the core of LAUNDRY DAY will always remain the same.