‘She is a living reincarnation of a 2000s it-girl’ 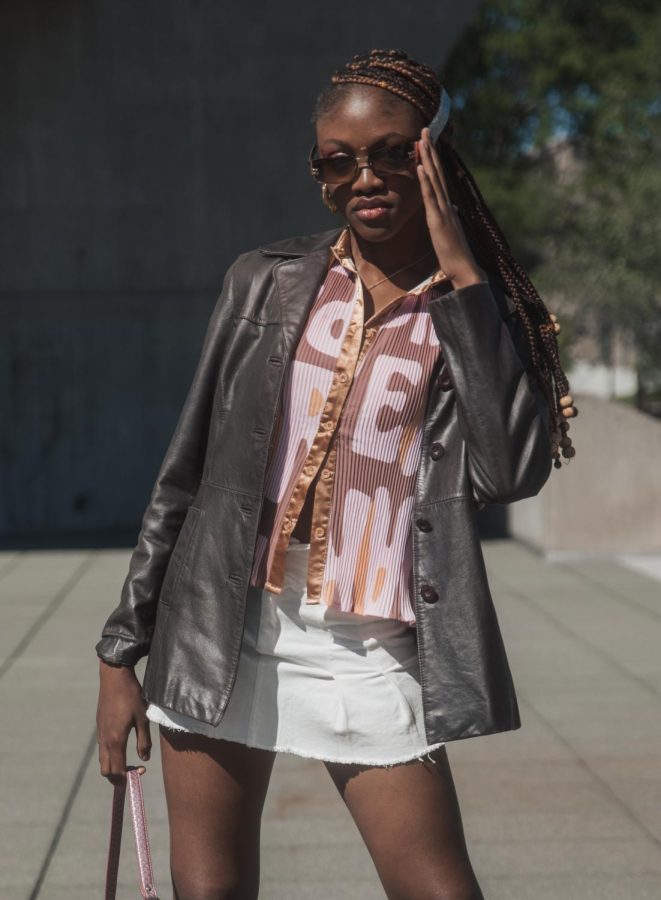 Walking around campus, Chichi Ogala is hard to miss. In a crowd of grey hoodies and sweatpants, she is a living reincarnation of a 2000s it-girl. Sporting a pink pattern top with a leather blazer, a short white skirt and black boots, she is dressed to impress. Towering at six feet with braids down to her legs, she is hard to miss.

Ogala is currently a senior civil engineering major at the University of Massachusetts, but on the side, she is a top seller on Depop, an app dedicated to reselling second-hand clothing. Selling over 2,300 pieces, she has amassed a following of over 15,000 people. Ogala first decided to start selling on Depop out of boredom at the start of the pandemic in 2020.

“I just wanted to try and get rid of clothes,” she said. “But then it started doing well and selling fast, so I thought that I should learn how to make this into a business and take it seriously.”

Ogala focuses on selling clothes that fit the Y2K aesthetic, which mimics trends and styles popularized during the late 90s and early-to-mid 2000s. Seeing an increase in popularity of this style, Ogala realized this was the specific aesthetic she was going to hone in on.

“You have to sell what’s trendy on Depop if you want to grow,” Ogala said. “That way you can build a solid customer base who go to you for a specific style of clothing”

Ogala describes her own style as fitting into the Y2K style too, as opposed to traditional streetwear. “I want someone to see me and see me as the epitome of Y2K” declares Ogala. “I’ve always been into the girly and alternative Y2K look, so I threw away all my baggy pants and bought clothes to build up this image.”

Born in Nigeria, Ogala found herself to be shy and timid for most of her younger years in the bustling streets of Lagos. Raised by her mother, Ihuoma Ogala, who used to sew her clothes, Chichi Ogala was first introduced to fashion through her.

“She would buy me fashion magazines so I could pick out the clothes I liked so she could make them for me,” Ogala said.

From a young age, Ihuoma Ogala saw Chichi Ogala  display an attentiveness for fashion, and said she isn’t surprised at the “fashionista” her daughter has become.

“When she was two years old, I would bring her outfits for Sunday service and she would say that she did not like it,” Ihuoma Ogala said. “I would carry her to her wardrobe to pick an outfit of her choice, and I thought it was funny that a small girl at that age knew the kind of clothes she wanted.”

Coming to UMass in the fall of 2018, Chichi Ogala noticed a gap for a fashion space on campus. To find other like-minded people who were interested in fashion, Ogala decided to form the UMass Fashion Organization in her sophomore year with friends.

“Starting this club at UMass is one of my proudest achievements,” Ogala said. “I hope that this club continues to inspire people like me on campus who want to make it in the fashion industry.”

Officially becoming as Registered Student Organization in the fall semester of 2021, UFO was created as a club on campus that targets students who want to learn the inner workings of the fashion industry. Currently, UFO has over 300 active members and over 1200 followers on Instagram.

General body members can have a variety of roles, ranging from models, designers, graphic designers, stylists, photographers, videographers, make-up artists and public relations. Earlier in the semester, UFO held a fashion show – marking their first major event as an RSO – on Feb. 17. The show displayed clothes from student designers at UMass and young designers from across Massachusetts.

Isargy DeLa Cruz, vice president of UFO, worked closely with Ogala and said that her motivation and determination inspires her.

“I’ve never met a person like [Ogala],” Cruz said. “I call her a hustler because that’s what she is, she pushes me to get up and do better.”

After graduation, Ogala hopes to continue selling clothes on Depop, even after she graduates from UMass. “One of my goals is to work for Depop full-time,” Ogala said. “I’m already a top seller but I want to be in the top five so I can learn the inner workings of running a clothing business.”

Ogala also hopes to further pursue a degree in fashion merchandising in New York City, a place she calls the heart of fashion. Her ultimate dream is to work for Vogue and to attend the MET Gala.

“I always have dreams about it, and I know it’s going to happen for me,” she said.

You can stop by Ogala’s Depop store @baddestbb, and stay up to date with the UMass Fashion Organization @umassfashionorg.

Wafi Habib can be reached at [email protected]