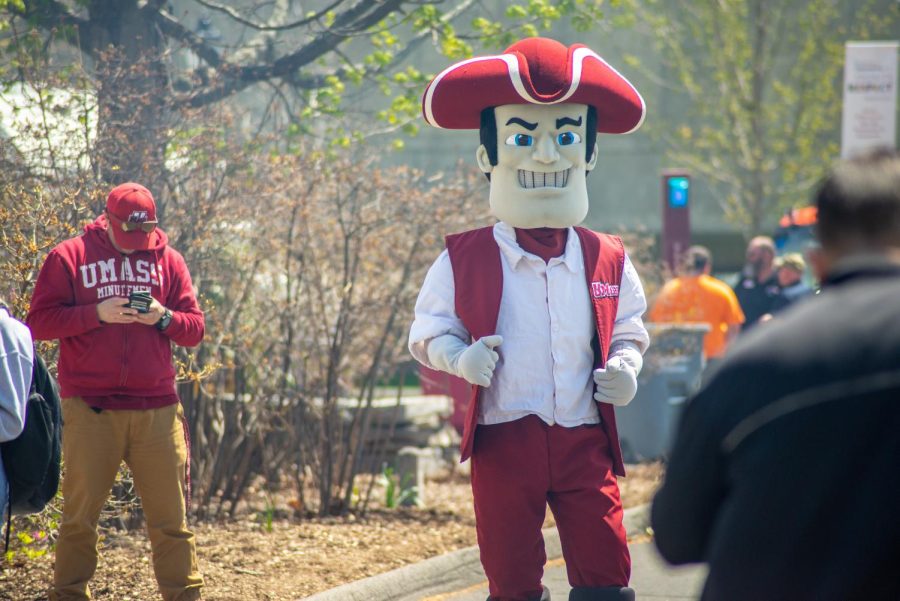 It’s been almost exactly one month since March 9, 2022, the day when the University of Massachusetts lifted its indoor mask mandate. Not five minutes after the beloved COVID-19 weekly update from the Public Health Promotion Center reminded students to wear KN-95s, the University communicated this change in the form of a plain text email with the subject line: “nevermind lmaoooo.”

Across campus, facility management staff were peeling COVID advisory posters from the doors of classroom buildings, previously stating, “Wear the right mask the right way.” These were then replaced with new posters that stated, “Respect people’s decision to still wear a mask, even if it’s a dumb lame nerd decision.”

With the majority of the student body going maskless, many are still feeling the effects of the mandate lift. The biggest change on student life is the sudden exposure of others’ facial features, which were normally hidden under masks.

“I forgot that people were more than just foreheads, eyes and eyebrows.” sophomore biology major Maude Derna admitted. “I’m not sure what I was expecting the bottom half of my professor’s face to look like, but I know for sure that I wasn’t expecting adult braces.”

“My professor gets very uhhhh… passionate… when she teaches, but now her full, unabridged facial expressions scare me,” junior computer science major Sanni Tashion said. “I really think the professors need to put their masks back on.”

“When students wore masks, they were able to hide their expressions of disinterest,” economics professor Aggie Grate-Demand lamented. “It’s so much harder to teach a lecture when I’m forced to look out at a sea of such unapologetically slack-jaw faces staring blankly back at me …,” she shivered. “I have seen the void, and it is an introductory course lecture at Marcus Hall.”

Some professors have even closed office hours, citing reasons such as, “I can’t recognize my students and I don’t want to embarrass myself,” and “I forgot what human facial proportions actually looked like.”

This stark difference has gone beyond the classroom and have extended into students’ social lives as well. “Tinder dates are all fun and games until you see the bottom half of the guy’s face,” freshman political science major Hope Letzromantique said.

Students may still feel phantom urges to slip on masks when entering buildings. Even though masks are no longer necessary, many report lingering, pandemic-conditioned jolts of panic and ennui when they feel their pockets and realize that they forgot to bring one. These sensations and anxieties can manifest themselves in compulsory fidgeting, the repetitive checking of pockets and general aggression towards others.

“He went in to kiss me through the mask,” Letzromantique continued. “No thanks — I’ve already seen enough couples doing that in the booths at Worcester [Dining Commons]. My brain’s autofill for the lower half of his face didn’t account for the possibility of that particular style of facial hair. Let’s just say that.”

When asked to comment, University Health Services said the suspicious jump in student illnesses “has absolutely nothing to do with the mandate lift or the hundreds of students bringing back heaven knows what from recent spring break travel.” UHS added, “and these factors most certainly are NOT working in tandem.”

Forgoing masks can make it easier to communicate, but what good does it do when everyone is too perturbed by each other’s faces to even make an effort? UMass needs to bring back the mask mandate for the sake of our own social comfort. Until then, from all of us here at the Massachusetts Daily Collegian satire department, please keep wearing a mask. We didn’t expect you to look like that and it’s scaring us.

Kelly McMahan can be reached at [email protected]