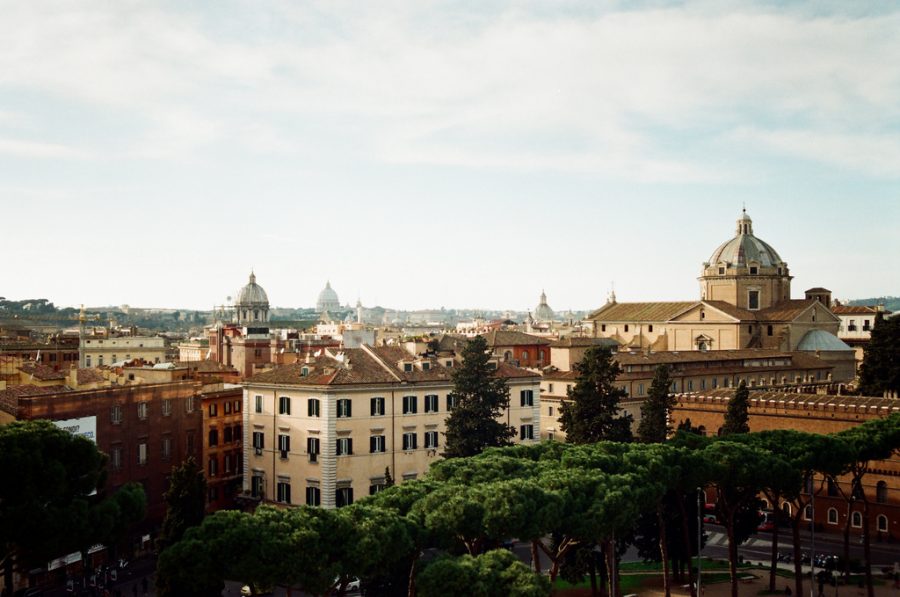 At Poggio Civitate, an early Etruscan site dating back to the sixth century, students don’t just study archaeology, they are the archaeologists. The project has been run completely by a body of mostly undergraduate University of Massachusetts students and a small staff for 57 years.

Most staff members started as students who kept coming back season after season. For Ann Glennie, a leading cataloguer on her 15th year of the project, “the feeling of being in Italy is nostalgic. It’s landing and getting in a taxi to leave the airport at Rome and the heat hits me and the Italian radio is going, and it feels like I’m home.”

“The rewards are enormous,” Dr. Anthony Tuck, director of the site and chair of the classics department at UMass, said. “But it really comes with the assumption of a certain degree of commitment and sacrifice.”

Many have found a small but hearty community amid the Americans that flock to the sleepy Italian village of Vescovado di Murlo each summer to dig in the dirt. The team rises with the sun to eat breakfast and make the half hour commute to the archaeological site each weekday morning.

Some even delight in this early morning ritual; Nora Donahue keeps coming back for more. In her 10 years with the site, she rose the ranks from student to trench supervisor. Along the morning walk, she explained, “I like listening to music on the way up and having a minute when I get there to gather my thoughts and sometimes stare at my trench.”

For her, the commute is a time for quiet contemplation and to take in the natural beauty of the landscape. “There’s occasionally hot air balloons that go up,” she said. “So, you’ll be walking to the site in the morning and it’ll be Tuscan hills with fog in various points of the valley and hot air balloons and it’s insanely beautiful. The views are breathtaking.”

When everyone has assembled at the site by 7:00 a.m., students scatter into small groups of three to five for trench and begin digging for archaeological evidence while the soil is still cool to the touch.

Every morning when 9:30 a.m. rolls around, staff and students gather to devour a bag of freshly baked cookies, chat and recharge before heading back out to work; it’s a well-loved tradition at the project.

“During that workday, your work can be very different,” Kate Kriendler, the associate director of the site, explained. “So, one of the things we do is we assign students to one trench per week and their assignment will rotate on a weekly basis. That way they get to work in different contexts and with different supervisors who will have to employ different methodologies depending on the context that they are excavating.”

Students dig in their assigned trench until noon, when the site takes a half hour break for lunch. Simple, high protein foods like cheese slices, bread, vegetables, pretzels and dip along with salty snacks are brought on site.

After refueling, it’s back to work. To keep student’s minds busy while their bodies do the work, trench supervisors will lead them in silly conversations and games.

For Kreindler, “Part of keeping morale up and going is conversation. I find that inane, ridiculous conversations in which you can just joke around with people tend to help pass the time. Some people play games in the trench, like word association or trivia, something like that. We also take breaks throughout the day and encourage people to take water breaks as much as they need them.”

After a day of tiring, but deeply fulfilling work, the workday draws to a close at 3:30 p.m. Some afternoons, students rush back for lectures by Anthony Tuck, the director of the site. “I enjoy not just talking about those lived experiences, but getting people to experience it for themselves,” he said. “Like getting people to make their own spindle whorls and spin their own thread, so they can actually physically engage in this process that connects them in a very meaningful and visceral way to the lived experiences of people at the site thousands of years earlier.”

Post-lecture, students are free to do as they please until dinner at 8:00 p.m. Many fill their free time with a nap or a dip in the hotel pool. If students have the energy, they may even play the locals in a game of soccer. According to Glennie, “they always beat us, so badly,” but it’s worth the dented pride.

For the social scene, students head over to the hotel bar. It’s the only place where wi-fi works well, so naturally it’s become the local watering hole where students can hang out, get a cappuccino, drink or bite to eat.

However, everyone saves their appetite for dinner prepared by the site’s personal chef. “Some cooks will really embrace local food and find out about all these different pasta shapes and different kinds of traditional sauces that would go on those,” Glennie said. “So, pasta is a pretty frequent component, with usually some kind of vegetable or grain to go with it. Occasionally some protein, although protein is a little harder to come by as it’s more expensive. Pork and beans are very big in the region.”

Occasionally, there’s themed nights like a taco night or grill night on the Fourth of July as a nod towards the American foods students tend to miss most. Dessert varies from popsicles to homemade tiramisu. The chef always celebrates birthdays with an extra special dessert.

For Tuck, “As much as I love a well-prepared Italian meal, sometimes one of the best things to eat can be when you reach up and grab plums off a tree. That late summer really sweet Italian plums are wonderful and all over the place. A hallmark of the end of summer are also the blackberries. You’re fighting through these thorny, tangled bushes then all of a sudden, it gives you this great gift at the end of the summer with these beautiful blackberries that you can pick off the bush.”

Working in the field may sound appealing, but it’s not for everyone.

“I always tell students when they come on a project like this, they’re not studying archeology, they are archeologists,” Tuck said. “We have exactly the same professional obligations as a project that runs with a paid staff.”

Tuck shares his final words of wisdom: “Working in the field you have this moment where you reveal something through that archaeological process that you didn’t know before. It’s a moment where you know something, you have this piece of information and you are the only person in the world who knows this thing in that moment. It makes me feel very small and insignificant in the grand scheme of things and I like that, I really do.”

“If working for 15 hours a day in the sun and being exhausted is not your thing, okay that’s great. But if this idea that you get to know something that no one else knows for that moment and you pass it onto the next person and describe what you think it is and they pass it on and they pass it on and it grows out into something that joins this body of human knowledge appeals to you, then come on the program,” he said. “It’s a beautiful place, the food is amazing, the work is fascinating but it’s not for everybody.”

Olivia dePunte can be reached at [email protected]