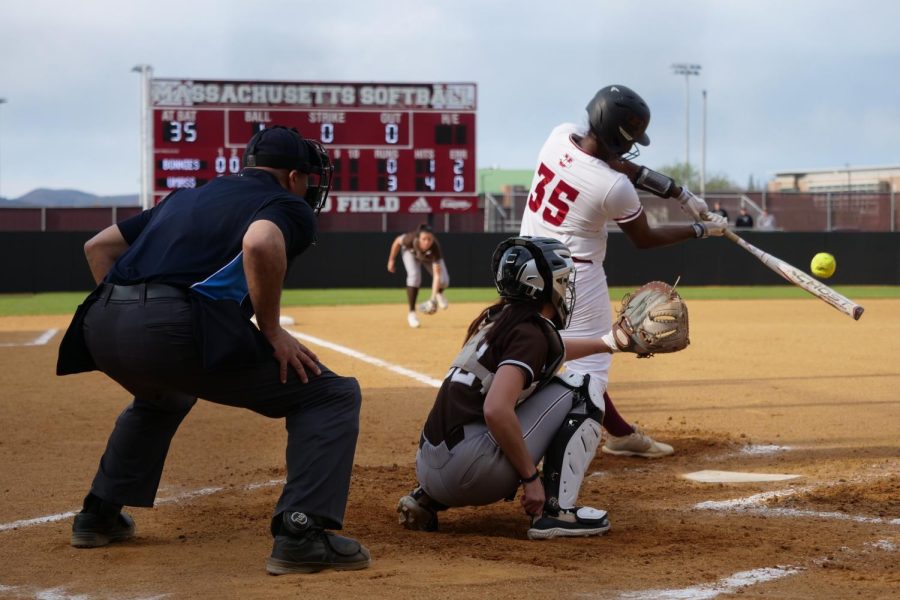 After losing its lead in the bottom of the fifth inning, the Massachusetts softball team battled back in its last at-bats and rallied for five runs in the seventh to pull out a 9-4 victory over Rhode Island. The Minutewomen (16-23, 9-6 Atlantic 10) held the Rams (9-25, 4-11 A-10) scoreless in the final two frames to improve their winning streak to four wins in a row.

UMass fought until the final inning to beat its fellow New England rival. The offense scored at least seven runs for the third straight game. Before the weekend series sweep over St. Bonaventure, the last time UMass put up at least seven runs was on March 30.

The Minutewomen got quality pitching again from their staff in Tuesday’s contest against the Rams. Julianne Bolton got the nod on the bump and finished with a no decision after letting up three runs and losing the lead in the fifth. Bolton has been a rock on the mound for UMass recently, and Tuesday’s win over the Rams was the third straight game she allowed four earned runs or less.

“[Bolton] was [cruising], but we’ve got four pitchers [on the roster] so why not use two of them to secure the win,” head coach Danielle Henderson said of the game management.

Bolton’s pitching line ended with her going four and a third innings pitched, four earned runs and three strikeouts. After going seven innings in her last two appearances, it was Bolton’s shortest outing since April 6 when she lasted three innings in UMass’ loss to UConn.

“It is [comforting to have DiPasquale come into the game],” Henderson said. “You know she is going to go at [the hitters] and lately when she’s been coming in to relief she’s been fired up and getting us out of [the jams] pretty quick.”

UMass tacked on a couple runs throughout the early frames but didn’t do damage until the seventh inning. With the game knotted up at four runs a side, the Minutewomen slugged for five runs in the top of the seventh to pull away from the Rams. Bella Pantoja brought in two runs with a single, extending UMass’ lead to three. UMass added on two more runs to give itself a comfortable five run cushion in helping to seal the victory.

Early on, UMass jumped out to a quick 4-0 lead thanks to two hits from Kendra Allen in the bottom of the third and fourth. Allen finished the day with four RBI’s, all coming by the end of the fourth inning.

The senior drove in at least one Minutewomen in each of the first four innings of the game. Allen ended the game going 2-for-2 with two walks as well. It was Allen’s first multi-hit game since April 10. Before the win against URI, Allen hadn’t driven in a runner in six games.

“I think [Allen] just went up their swinging the bat and was a little bit more aggressive,” Henderson said.

UMass faces off against UMass Lowell on Wednesday with first pitch set for 3 p.m.