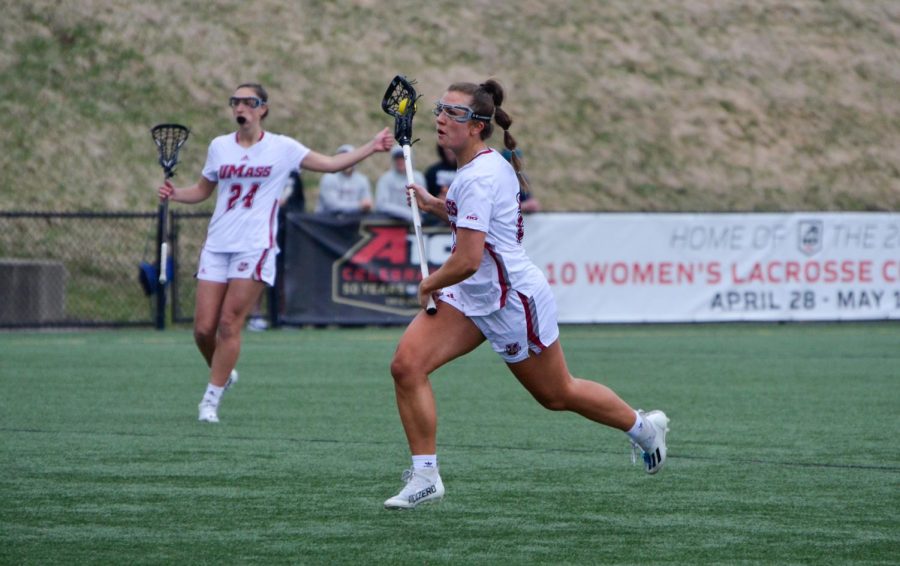 The defending Atlantic 10 champions led for the entire game. The Minutewomen (10-2, 4-0 A-10) held the Patriots (4-8, 2-2 A-10) to zero shots on goal in the opening 15 minutes. UMass forced five turnovers in the first quarter, capitalizing on those opportunities and closing out the quarter with an 11-0 lead.

“We have really been focusing on our shooting,” head coach Angela McMahon-Serpone said. “Every opportunity we got, we did a really good job of putting them away.”

“We have been working on getting the ball around to every single spot,” Muscella said. “If you have one girl scoring all your goals, it is pretty easy for a defense to scout your team. But if you have 14 plus girls that are scoring, it makes us very versatile and hard to be scouted and it is really exciting having everyone contribute to our wins.”

“We had to really commit to being aggressive and playing fast,” McMahon-Serpone said of her team’s defense. “We’ve got lot of speed, and a lot of experience on the defensive end. So just relying on that to really anticipate and get up in their faces.”

“[Anderson] is an amazing leader, so that leadership I think she radiates through everything, not only her voice but her play” McMahon-Serpone said. “[Anderson’s] aggressive, she dictates the tempo, her communication skills are excellent … she’s one of the best leaders we’ve had”

“In the first half we focused on playing a really united defense,” Anderson said. “When I go for those interceptions and those caused turnovers, I know that somebody is always going to have my back, so I think that really helps us on the defensive end to stay united.”

The Minutewomen have yet to allow an opponent to score double digits in A-10 play. UMass has out-shot its opponents 37-12 and has a 12-6 ground ball advantage. The Minutewomen have shown dominance in all its conference matchups this year, but that dominance will get tested against another undefeated conference team in Richmond. The Spiders (9-2, 4-0 A-10) also haven’t conceded double-digit goals in conference play. That matchup will be next Sunday in Amherst.

Regardless of the undefeated conference record, McMahon-Serpone knows there’s areas that need improvement. Most of which centers around controlling possession for long periods of time, giving opponents even less time for scoring opportunities.

UMass plays two more games home at Garber Field before heading to La Salle on April 14. The first of which is this Friday against George Washington at 1:30 p.m., which is followed by the Richmond matchup on Sunday.

Julia Indursky can be reached at [email protected] and followed on Twitter @juliaindursky.