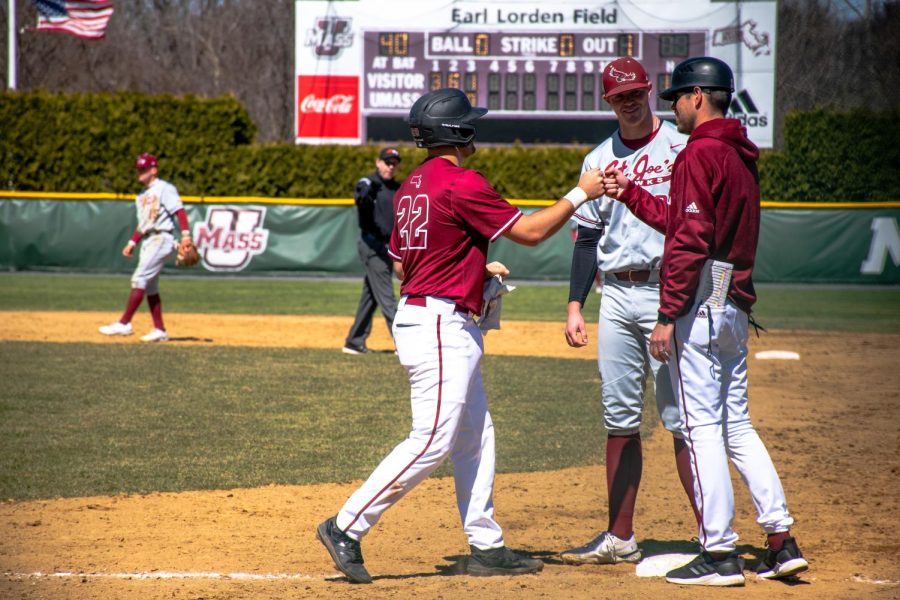 The Massachusetts baseball team defended home field for the final time this season in a nail-biting matchup against Quinnipiac. UMass (21-24-1, 7-14 Atlantic 10) walked off the Bobcats (15-30, 8-12 Metro Atlantic Athletic Conference) in the bottom of the 10th inning, scoring four runs on eight hits.

For the second time on Tuesday, Matt Gervasi found himself in a bigtime at-bat. With the UMass faithful watching from the stands for the final time this season, and college baseball fans tuning in on ESPN+, he got a pitch he could handle. With ice in veins, he pushed a single into right center to score Kevin Skagerlind to walk off in dramatic style. The final score read 4-3.

Tuesday’s game started off slowly, with neither team putting a run on the board until the third inning. The Minutemen employed a slew of pitchers throughout the game, eight in total. Ben Chrzanowski started the game, tossing a scoreless inning. Max LeBlanc came into the game in the top of the second and gave up a run on two hits in two innings of work.

Quinnipiac broke the tie in the top of the third inning, on an Anthony Donofrio double to right center field, scoring Jared Zimbardo. The Bobcats led 1-0 after three somewhat uneventful innings.

UMass’ Zach Given made a relief appearance in the top of the fourth, going an inning with one hit and no runs scored. The following inning, Cole Koeppel relieved Given with a three-up, three-down frame.

In the bottom of the fifth inning, UMass finally answered offensively. Colin Shapiro singled up the middle to score Matt Gervasi, evening the score at 1-1. Quinnipiac didn’t waste much time returning fire, however.

The following half inning, the Bobcats scored two runs on three hits to extend their tedious lead to 3-1. It wasn’t a particularly pretty inning, but the visiting team put pressure on the Massachusetts offense, nonetheless.

In the bottom of the sixth, UMass came right back with two runs of its own, on two hits and quality base-running. Drew DeMartino left his mark on the inning by first getting on base on a single up the middle, stealing second base, advancing to third on a passed ball, and scoring on a Dylan Judd sacrifice fly to right field. Gervasi stepped up big, guiding a single to right field, scoring Will MacLean to tie the game at 3-3.

The game remained tied by inertia from both offenses. The Minutemen had a few different relievers for the remainder of the game, including Tyler Dalton, Jared Henry, and Blake Bennett. The game remained tense down the stretch, heading into the tenth inning.

In the bottom of the tenth inning, UMass finally shut the door on the Bobcats. Skagerlind led off with a single to left field. Drew DeMartino sacrifice bunted to move Skagerlind into scoring position at second base. Quinnipiac intentionally walked the ever-dangerous Will MacLean, to try and force a double-play situation with one out. Dylan Judd then grounded out to second base, doing his job in advancing both runners.

Gervasi then secured the win.

As the Minutemen prepare to travel for their last series of the regular season, they stand three games under .500. Their collective batting average has dipped slightly, rounding out at .270. They continue to allow their opponents to hit at a productive clip, who average .328. UMass can reach a 24-24-1 record if its sweep George Washington, in its final A-10 series.

The Minutemen will travel to Washington, D.C. to face the Colonials in an important three-game stand. First pitch will be on Thursday, May 19 at 3 p.m.