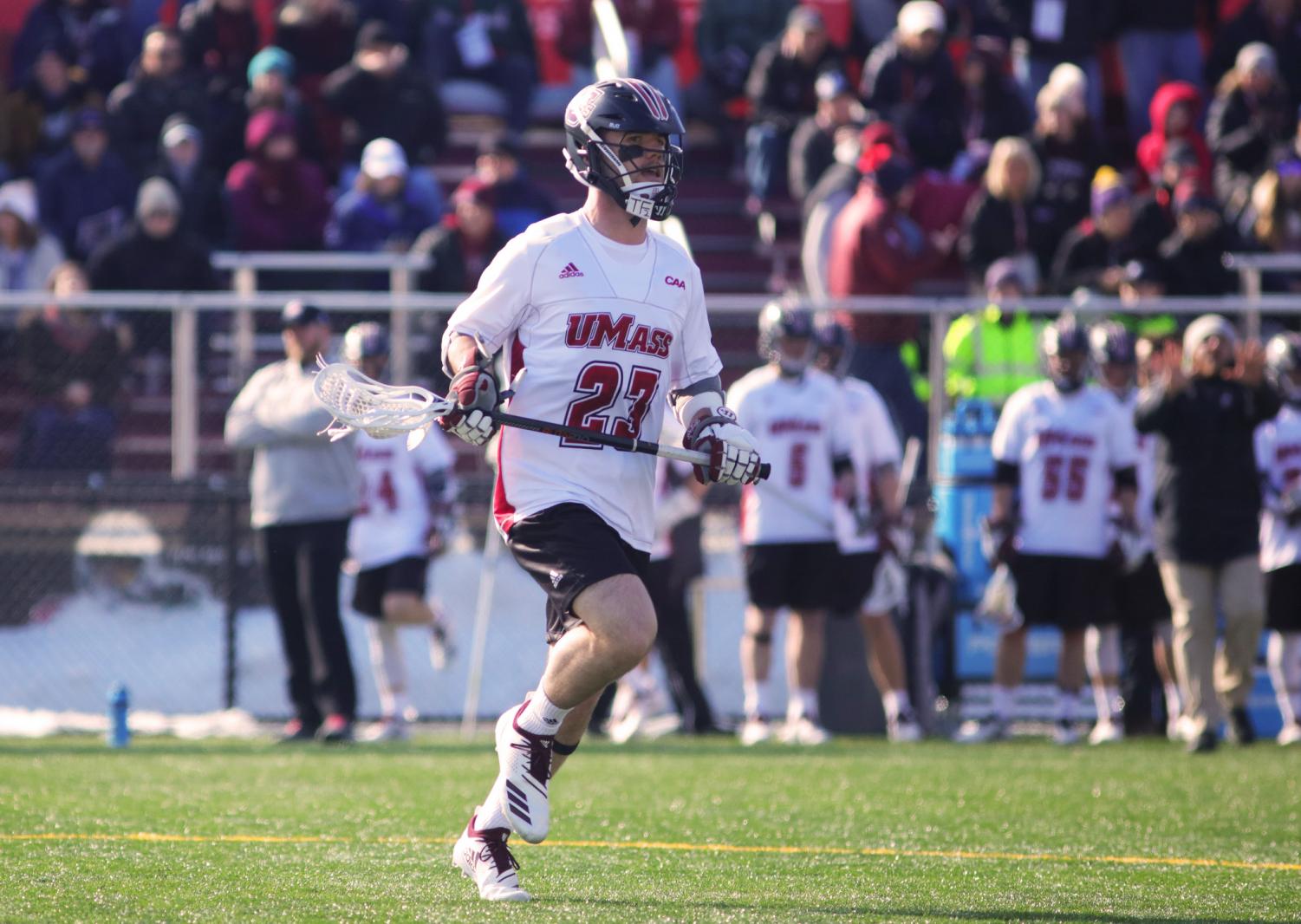 It was a cloudy, overcast day in early February of 2016, the day before the season-opener at Army in West Point, New York, and the Massachusetts men’s lacrosse team was practicing and getting loose. At the time, Billy Philpott—a Sandwich, Massachusetts native and product of Tabor Academy—was a true freshman, preparing for his first collegiate game.

Primarily an offensive player as a freshman, Philpott was dodging in from the wing when his feet got tangled with a teammate’s. Philpott was sent to the ground, and as he attempted to break his fall, his left hand got pinned underneath the shaft of his stick.

Philpott trotted off to the sideline and sought the opinion of fellow freshman Ben Spencer, one of Philpott’s closest friends on the team. At the time, the two were both on the same second-string midfield line. They have been roommates for three years.

“He was like asking me what I thought about it, and I was like, ‘Oh, you’re probably good. Just shake it off, get back on the field,” Spencer recalled. “And then he was showing me the bruise on his hand. It looked like he had a golf ball in his hand.”

Hoping it was just a sprain, Philpott had the hand taped up and played in the Army game the next day, determined not to miss the first game of his college career, almost scoring even with a swollen left hand — “He shot a dribbler at the goalie’s feet, about 20 miles per hour, but still gave it a good effort,” said Spencer. When the team got back from the trip, an X-ray was conducted, and Philpott’s fears were confirmed: the hand was broken.

About a week after the news, Philpott underwent surgery. Five pins, one screw, and a plate. Philpott wore a cast for a week. When his stitches were taken out, he wore a brace, and for six to eight weeks, he was prohibited from any contact drills.

“No wall ball, no stick, anything. Just running,” said Philpott. “So, actually, I mean beneficially, I got in really good shape there. That kind of set my college standard there [of physical fitness.]” 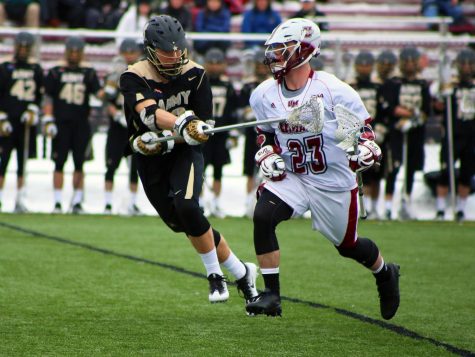 The key to not getting frustrated during rehab was setting out small tasks and seeing slow, steady progression.

In addition to the support of family, athletic trainer Bob Kuzmeski, and coaches, Philpott appreciated the outreach from his teammates throughout his recovery process.

“We really preach the brotherhood here,” said Philpott. “I remember I got out of surgery, and I had like 15 texts from different guys—seniors all the way down. And as a freshman, that was pretty cool to see that… the hardest part of it, especially as a freshman, you get hurt and you’re out, you feel almost out. So, like, when more guys are like, ‘Hey, come help us shoot. Come throw balls with one hand’ or something… they were awesome to just kind of keep me involved, keep my mindset [right].”

Spencer sees Philpott as one of the toughest and most positive guys on the team, but he knew that it hurt his friend that he couldn’t be out on the field, earning his place on the roster and showing his value. Tony Reale, a 2019 co-captain, used positive reinforcement and perspective to keep up the spirits of their teammate.

“It happened on the first game of his freshman year,” said Reale. “It’s a good time to, you know—it’s not like he went five games in and now he can’t redshirt, but he’s got that extra year to work, get better, and also learn.” 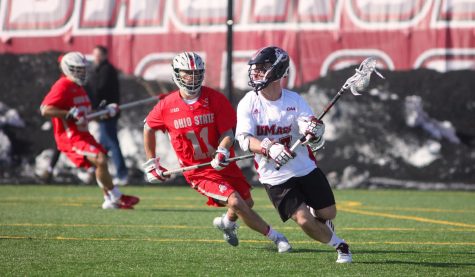 It wasn’t until after last year’s Albany game that Philpott really took off and played his way into a prominent role on the team. The Albany game was a nightmare for the Minutemen, a 19-8 loss that dropped UMass to a 1-4 record. On the bright side, though, Philpott scored his very first collegiate goal that day, a personal milestone.

Over the remaining games of the season after the loss, Philpott saw an uptick in minutes and helped UMass tear off 11 straight wins and advance to the NCAA tournament. The midfielder finished the season with 20 groundballs, 11 caused turnovers, and 12 points on 11 goals and an assist. His 2018 breakout was highlighted by a three-goal effort against Hofstra in April, making him the only known short-stick defensive midfielder to post a hat trick in UMass history.

“He went on a crazy road,” Spencer said. “With the whole starting as a second-line o-middie [offensive midfielder] to basically season-ending injury, to next year trying to play o-middie and move to d-middie, and then basically taking that, thriving with that, and now he’s back to like a two-way middie.” 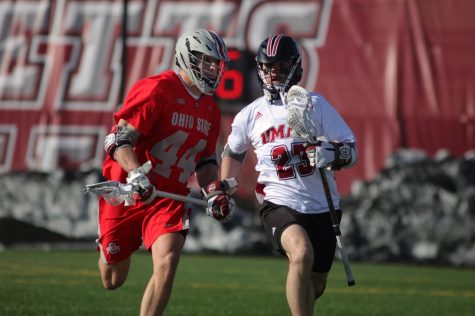 So, what was the main catalyst behind Philpott’s transformation from a seldom-used reserve to a key glue guy and role player? His effectiveness on both ends of the field.

Like other sports, lacrosse has experienced increased specialization in recent years, making two-way players like Billy all the more unique. The last UMass short-stick defensive midfielder to truly play both ways as Billy does was Brian Jacovina (2004-2007).

Today, after a team has crossed midfield following a defensive possession, the short-stick defensive midfielders will typically run off the field and the offensive-minded middies will sprint on, and vice versa.

“And usually those defensive midfielders were good athletes, but didn’t have the stick skills of the offensive midfielders, so it became really specialized,” explained Jacovina, who notched 84 points and 94 groundballs over 60 games at UMass.

Usually, most freshman middies end up earning their chops on the defensive end, since their offensive skills aren’t on the same level as the upperclassmen who have more experience. Eventually, they’ll either stick to the defensive end, or they’ll convert to offensive midfielders once slots open up.

A select few, however, will become skilled enough on both ends that they’ll simply remain on the field after changes of possession. For teams that want to run-and-gun like UMass, two-way glue guys like these are especially valuable.

“The more guys that you have like Billy, the better you can get in transition, and it’s hard to score 6-on-6 now,” said Jacovina. “So if you can get transition goals it’s a lot easier to score.”

With all the end-to-end running that comes with the role, two-way players have to be in peak physical condition. As a result of all the sprinting, it can become hard to stay disciplined on defense, and most middies don’t even want to be on that end in the first place. Thus, it can often times be an inglorious role, which is what makes guys who embrace it increasingly rare in the upper levels of lacrosse today. 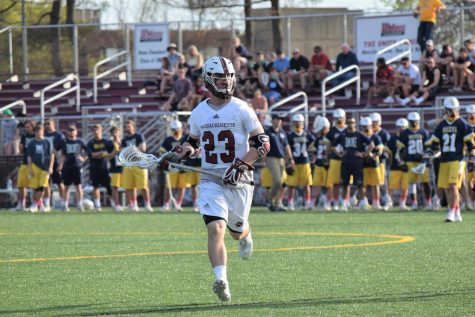 “He’s a very selfless guy, very unselfish on the field,” said coach Greg Cannella. “He was willing to take on any role. As we developed in terms of what we do in transition, Billy just kind of fell into that. He’s one of the better transitional players that’s out there, for sure.”

While being a two-way glue guy who doesn’t exactly rack up the most stats is a role Philpott accepts head-on, the redshirt junior prefers to see all the little things he does in a team context.

“We have a lot of guys that do things that stats can’t cover, [things] that we really preach down in our film room and in our little locker room that we kind of appreciate,” said Philpott. “Playing two ways, just playing good defense as a shorty on someone, not needing a slide, or recovering fast—those little plays for us are big plays. The goals are great and all, but we pride ourselves on those little plays.”

Even with Philpott continuing to make the little plays that add up in the end, Reale believes Philpott has become the “point guy” for UMass with his effectiveness and leadership on both sides of the midline.

“He’s getting older, he’s got one more year, but he still plays like a senior. So he’s able to put up points for us and guys rely on him on D,” said Reale. 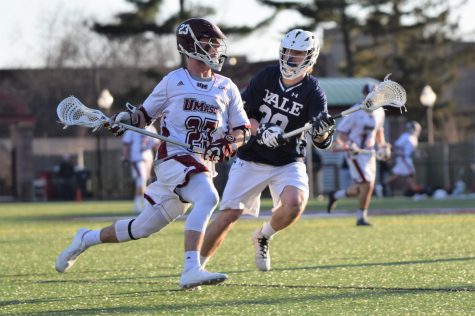 The 2019 season hasn’t started as smoothly as the Minutemen would have liked. The Minutemen have dropped their first two contests of the season to Army and Ohio State, falling out of the top 20 rankings. Philpott has started in both games and racked up two goals and two ground balls.

It’s early, and UMass has plenty of more contests over which to improve. Regardless of whatever is in store for Philpott and UMass in 2019, the middie is prepared to face it. After having to endure a lost freshman campaign due to an injury beyond his control, Philpott feels better-equipped to handle any future challenges that come his way.

Moreover, sitting out for a season also made Philpott more appreciative of the opportunity he’s been given.

“It really made me appreciate how lucky that we are to be here,” Philpott said. “Like, just kind of standing on Garber Field, playing for coach Cannella, playing as a Garber Gorilla is one of the best privileges any of us have ever had. When that gets taken away from you by an injury, it kind of opened my eyes. Like, ‘Wow, I need to take advantage of this opportunity.’ Whatever I get, whatever that they want me to do, I’ll do to the best of my ability.”

Ben Painchaud can be reached at b[email protected] and followed on Twitter @Ben_Painchaud.