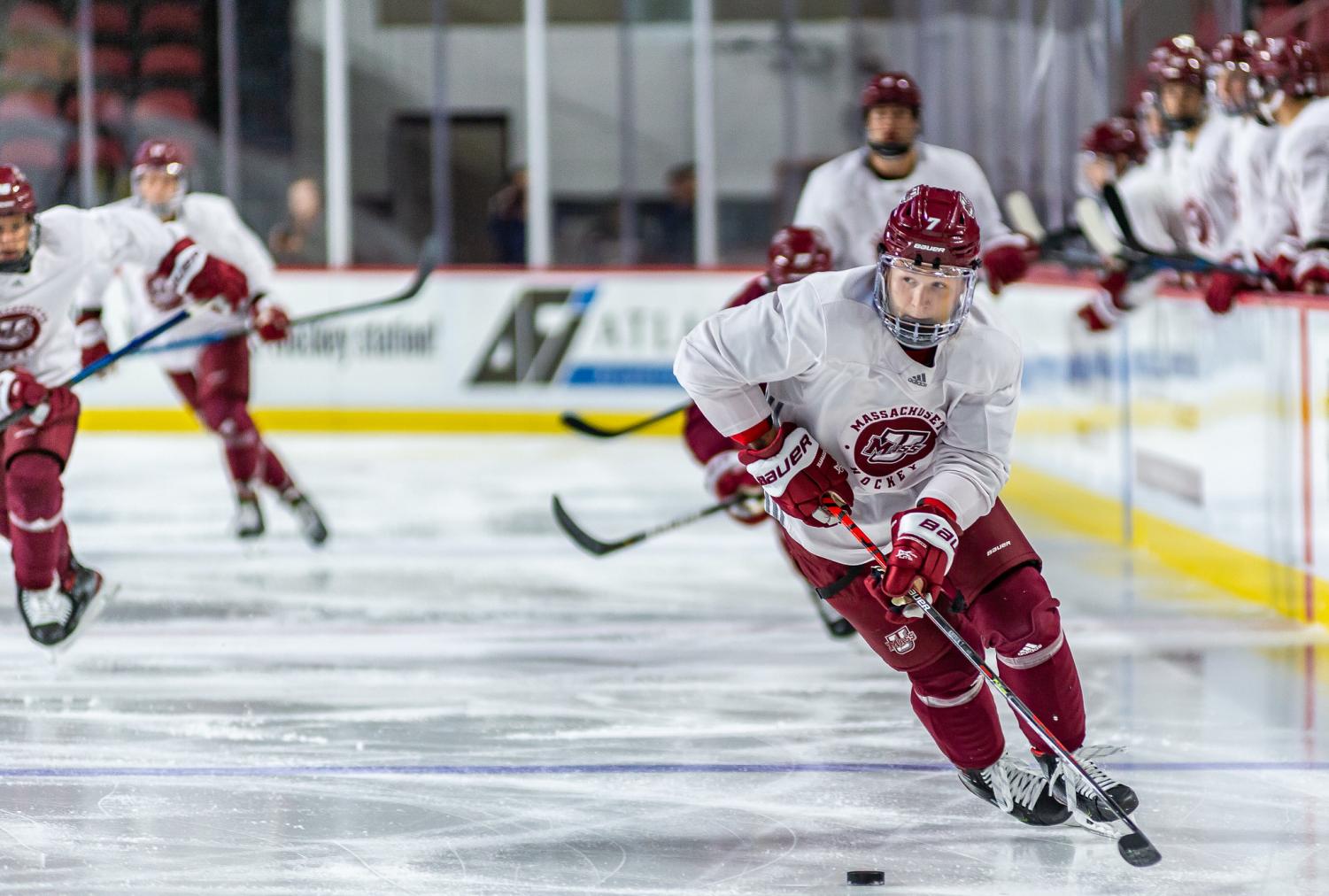 The freshman forwards look to bolster the Minutemen offense

Cal Kiefiuk and Jeremy Davidson will take the ice with the Massachusetts hockey team for their first game on Friday. When the two suit up in the maroon and white, it won’t be the first locker room they have shared. Kiefiuk and Davidson first played together for HoneyBaked Hockey Club when they were just 13 years old.

“We kind of have a brother-like bond,” Kiefiuk said.

For HoneyBaked Hockey’s Bantam AAA team, Kiefiuk and Davidson combined for 49 points in 38 games. Despite growing up a few hours away from one another in Michigan, the two finally crossed paths in 2013 for the Detroit-area hockey club.

When Kiefiuk came into the HoneyBaked program, his skating ability left little to be desired.

“I started by playing roller hockey,” Kiefiuk said. “I didn’t start playing ice hockey until I was pretty old. For me, a big thing was skating. Skating is a lot different. I got a lot of extra work with edge work and getting my feet moving.”

It’s hard to imagine in the state of Michigan, where winter temperatures regularly sit in the 20s, that someone would have more experience on roller blades than ice skates. But Kiefiuk struggled early on to use his edges effectively and found himself at a disadvantage when it came to skating.

“[HoneyBaked] is where I owe a lot of my success to,” Kiefiuk said. “They ran probably some of the best practices I’ve been a part of besides here. It wasn’t as much about system; it was more about skill development and developing us as players.”

Donning the black and gold of HoneyBaked, Kiefiuk hit his stride in his development. Playing in 20 games, he led the team with 18 goals and 29 points.

HoneyBaked hockey began its play in 1994 and has proven to be one of the top programs for development in the area since. Its alumni include the likes of NHL stars such as Ryan Kesler, Patrick Kane, Cam Fowler and Justin Abdelkader. On top of developing top-tier players, HoneyBaked has won five USA Hockey national championships.

While making significant developments in their games on the ice, the two young forwards developed a friendship off the ice that lasted beyond their time with HoneyBaked. Spending hours and hours together made the two realize they had some things in common. Being on the same line for HoneyBaked meant they could constantly crack jokes to one another, whether on the bench between shifts, on the ice during practices or in the locker rooms before or after games. Kieifuk and Davidson’s senses of humor naturally gravitated them toward one another, creating a sense of comfort between the two.

Davidson parlayed his time with HoneyBaked into joining the storied prep school of Shattuck St. Mary’s.

In Davidson’s time at Shattuck, he crossed paths with another Minuteman, Bobby Trivigno. A young Davidson scored 48 points in 53 games for Shattuck’s midget prep team during the 2016-2017 season.

While Davidson was playing alongside another future teammate, Kiefiuk had been drafted to the United States Hockey League’s Bloomington Thunder. The adjustment to the faster and stronger USHL game was evident in Kiefiuk’s production that season. Coming into the league, the rookie was tabbed as a goal scorer and an all-around offensive threat. Yet, his scoring prowess failed to show as he struggled to adjust to the faster, more physical league. As a rookie, he netted just four goals in 52 games with the Thunder.

Heading into the 2017-2018 season, an unlikely chain of events brought the former HoneyBaked teammates back together.

After a less than impressive rookie season, Kiefiuk’s Bloomington Thunder changed their name to the Central Illinois Flying Aces and were willing to give Kiefiuk a second chance to show that he was the same electric scorer that they had seen in his time at HoneyBaked.

“It’s weird how things work,” Kiefiuk said. “We always seem to find a way to back and keep our relationship strong.”

Davidson then made the move to the USHL himself, getting drafted into the league by the Flying Aces. The move brought the friends back together for the first time in three years, seemingly benefitting the struggling Kiefiuk.

Sharing the ice once again, the two also began sharing a room, revisiting the same inside jokes they had made as 13-year-olds.

“It’s great,” Kiefiuk said of playing with Davidson. “He’s got a great attitude towards everything; we’re always making the best of everything and having a good time.”

Back with Davidson, Kiefiuk finally looked comfortable in the USHL. In 60 games, Kiefiuk flashed some of the scoring prowess that had made him so dangerous at HoneyBaked, notching 46 points to lead the team. Davidson had a slower start but still managed to put up the third-most goals and fourth-most points with the Flying Aces.

“We have the same birthday,” Kiefiuk said. “That’s been a thing for us since we started playing together when we were like 13.”

UMass almost missed out on Kiefiuk in recruiting. A native of Macomb, Michigan, Kiefiuk grew up a huge Michigan fan. In 2016, Kiefiuk’s dreams were realized and the forward committed to play for the Wolverines. So how did a lifelong fan of Michigan, a traditional Big 10 school with hockey pedigree, end up playing in Western Mass. for a program getting its first taste of success? A lot of that can be credited to his relationship with Davidson.

“We’ve known each other for quite some time,” Kiefiuk said. “It was something I was familiar with to help me adjust to coming so far away from home. He was committed a lot longer so he kind of helped me out and he knew so some stuff if I had questions.”

When the forward began to reconsider his options and re-opened his recruiting early last year, his bond with Davidson helped the Minuteman reel him into their 2019 class. Kiefiuk went to Davidson with questions and concerns, obtaining information via his close friend rather than coaches and recruiting staff like he had with other programs. That, in conjunction with the fact the team was coming off an appearance in the national championship game.

The help in coming to Amherst however has been a two-way street.

“[Kiefiuk] is someone that I’m really familiar with,” Davidson said. “That definitely helped when I got here, just knowing at least one of the guys.”

The two are roommates once again at UMass. Returning to the familiar living arrangement has been a welcome one for the freshman teammates.

“He’s a character for sure,” Kiefiuk said of Davidson. “We’ve had some good times together. We get along really well. He’s pretty easy going I’d say. He likes cracking jokes, there’s a lot of inside jokes that we’ve had for some years that are still going strong.”

After adjusting from their Bantam team at HoneyBaked to prep school and then the USHL, the pair have what might be the toughest adjustment yet ahead of them.

“[The freshman need to] follow the systems. Play hard. Learn to compete at this level,” Carvel said. “It’s the biggest issue — kids coming from juniors to this level don’t understand how hard you have to compete. It has very little to do with how fast you can skate, how well you can stick handle the puck. If you can’t check, if you can’t compete, you can’t play at this level and that is a lesson that they learn quickly and takes a while to adjust to it.”

“Everything is at a higher speed and you’ve got to get used to that,” Kiefiuk said. “But I think the six weeks in the summer we spent here helped us out a lot and we’re starting to get our legs under us. You gotta play bigger than you are. Nobody is gonna play you lighter just because you’re small. You gotta be physical at all times.”

In UMass’ scrimmage on Oct. 5th, Kiefiuk showed he wasn’t afraid to play physical. When a puck was dumped into the offensive zone, Kiefiuk was aggressive on the forecheck, winning the puck below the net and putting a perfect pass to a teammate crashing towards the net. The shot was harmlessly deflected away but in Kiefiuk’s first action in a game-type setting, he showed he was ready to play above his size in order to contribute to the Minutemen.

Though Kiefiuk and Davidson have found an abundance of personal success when playing together up to this point, they would like to change one thing about how all their previous stops have ended. They have yet to win a trophy together.

The closest the two came was a runner-up finish with HoneyBaked. While playing for the Flying Aces, the two failed to even qualify for the playoffs in their two years with the team. Playing with the Minutemen gives them their best chance yet to finally make hosting a trophy happen.

“Honestly, we’re really deep this year,” Davidson said. “We’ve got some older guys that did a lot of good things in the past two years and I’m just gonna do whatever I can do and the other freshman are as well, see where it goes from there.”

Whether goofing off in their dorm room or playing in front of the 8,000-plus at the Mullins Center, Cal Kiefiuk and Jeremy Davidson have a special bond. A bond that began six years ago in rinks in the Detroit suburbs and grew deeper in Bloomington, Illinois playing for the Flying Aces. A bond that has brought them together once again in Amherst, Massachusetts, in hopes of accomplishing the one thing that has seemingly alluded them the whole time: winning it all. 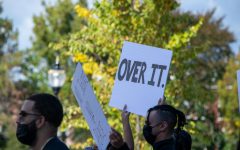 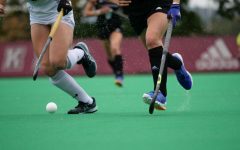 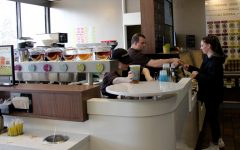 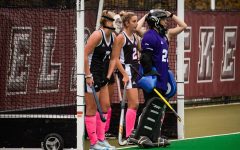 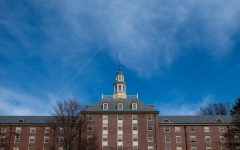 It’s never too late to change your career plans 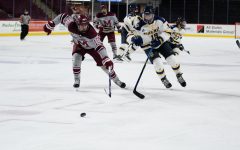 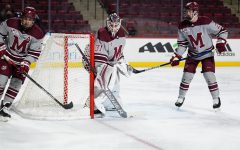 McCarthy: UMass needed to bounce back against AIC, and it did 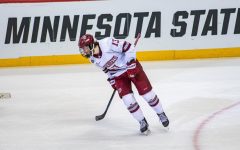 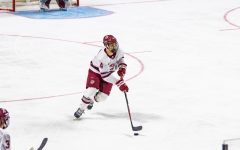 New defensive lines shined from UMass in win over AIC