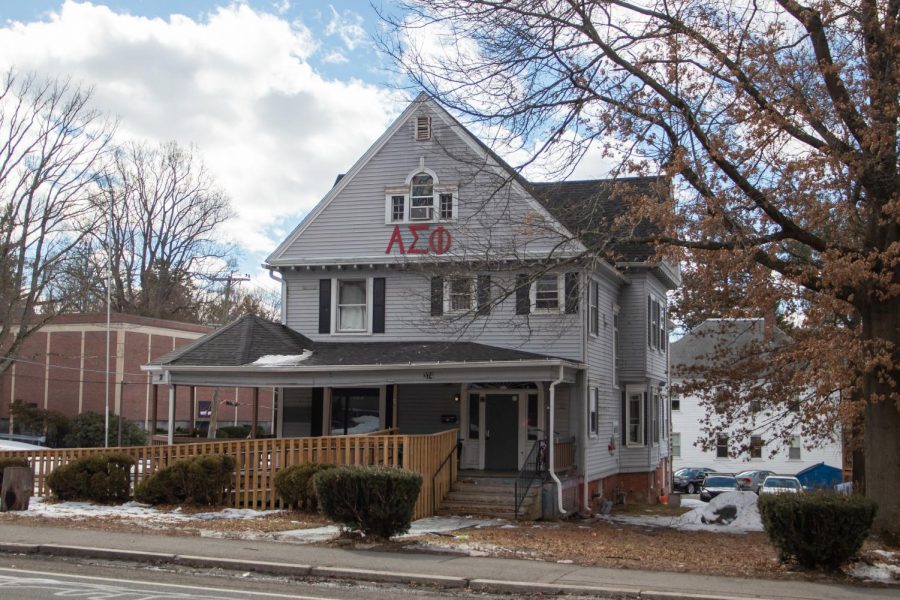 She was walking down Fearing Street with a group and had just left a gathering at Alpha Sigma Phi. Being a chilly night, the young woman offered advice for those going to the fraternity:

“Leave [your jacket] on the table when you first walk in and you’ll be fine,” she said. “No one will touch it.”

Further down the street, Phi Sigma Kappa was also hosting a gathering, but students were seen leaving the house as police arrived.

“Don’t go to Phi Sig. There’s tons of cops there,” a student walking away from the house told a reporter in passing.

Both parties occurred during the University of Massachusetts’ self-sequester period, which ended Monday. The University had directed students on and off campus to refrain from leaving their residences except for essential activities, citing a sharp rise in positive COVID-19 cases in recent weeks.

This article is based on firsthand observations by Daily Collegian reporters and passing comments made to those reporters by attendees, as well as interviews with a Student Government Association senator who was invited, two sorority members and four freshmen who knew of the gatherings.

Seven sources in this story were granted anonymity for fear of retribution. Several sources who spoke with the Daily Collegian said they were not afraid of consequences from the University — they were afraid of backlash from fraternity and sorority members.

On Saturday night, reporters walking around campus and the Nutting Avenue and Phillips Street area — known for its abundance of fraternity and sorority houses — observed gatherings at the fraternities and had brief exchanges with those who attended. Several comments were given in passing to the reporters.

Throughout the night, dozens of students, many not wearing masks, were seen walking through the neighborhood. One person asked for directions to Alpha Sigma Phi and another young woman without a mask asked reporters which gathering they were going to.

Loud music could be heard coming from Alpha Sigma Phi, which sits on the corner of North Pleasant Street and Fearing Street. Reporters also observed a heavy police presence outside the house.

A member in sorority leadership who lives in the neighborhood heard the music playing throughout Saturday night and called the police. Large gatherings at Alpha Sigma Phi have been frequent this semester, she said.

On numerous occasions, she has seen crowds of people entering and leaving the house, she said. “Some of them have girlfriends, but not that many girlfriends.”

A member of Alpha Sigma Phi invited an SGA senator to in-person recruitment events on Friday and Tuesday, promoting “wine bag races” and “Taco Tuesday with margaritas,” according to a picture of a Snapchat message provided by the senator. 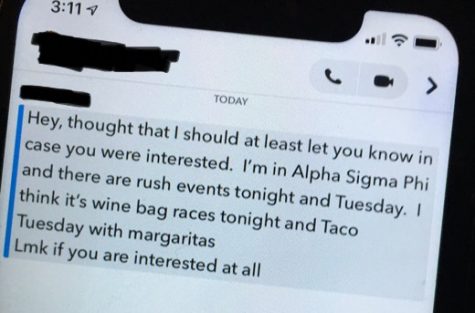 The senator reported the invitation to the Dean of Students Office but only received an automated response in return, he said. Fraternities are not allowed to host in-person rush events due to COVID-19 restrictions.

“When this information fell into my lap, it was a tough position. But I felt the need to prevent a [potential] super-spreader event,” the senator said. “Nobody likes being the person to report it. But in reality, someone has to do it.”

Alpha Sigma Phi did not immediately respond to a request for comment about either gathering. 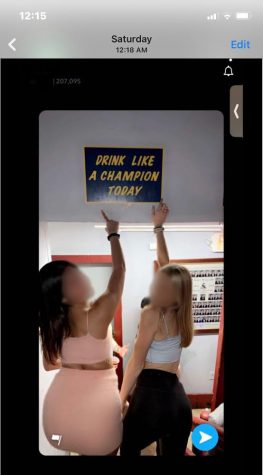 In interviews with the Daily Collegian, four freshmen said students had been discussing the Friday night Alpha Sigma Phi gathering in a class-wide Snapchat group the following day.

Some people in the Snapchat group were “shaming people” that went to the gathering, one freshman said. “There were a lot of people beefing there.”

On Friday night, another freshman and her friends counted 15 young women they saw on social media at the Alpha Sigma Phi house, she said. A timestamped screenshot provided to the Daily Collegian shows two young women, who live in a dorm in Orchard Hill Residential Area, posing in front of a composite of Alpha Sigma Phi brothers.

One of the young women in the photo did not respond to a request for comment. The other could not be identified.

“It’s frustrating and also just terrifying,” the freshman said. “My friends and I can do everything to be safe, but there’s people who live above us who aren’t even following guidelines… and they’re not being quiet about it.”

On Saturday night, Phi Sigma Kappa hosted a gathering further down North Pleasant Street. Reporters saw groups of several students entering and leaving the front and back doors of the house around midnight; the latter was watched by two men throughout the night.

A Daily Collegian reporter who was near the house was followed by one of the men for several minutes while leaving the area.

Igor De Sousa-Vieira, president of Phi Sigma Kappa, said a gathering had been held at the house Saturday night, but he claimed it did not break COVID-19 restrictions set by the fraternity, state, town or University.

“Any attendee alleging there was a party is mislabeling a gathering with loud music that included eight guests and a select component of the 16 residents,” he said in an email to the Daily Collegian.

De Sousa-Vieira provided a virtual sign-in form from Saturday night, which shows that eight non-fraternity members had registered to attend the gathering. In total, the form shows 27 people who signed up.

But shortly after midnight, Daily Collegian reporters counted 16 people — who mostly appeared to be young women — leaving the fraternity house and heading toward the Central or Southwest Residential Areas. Many of the students were not wearing masks. Four students who left told reporters they had been at Phi Sigma Kappa.

However, the sign-up form provided shows that people registered for the gathering Saturday night — two days before the self-sequester period ended — and reporters observed the gathering as it was happening.

The gathering was also in violation of current state guidelines, which say that hosts must limit indoor events at private residences to 10 people. The president said that rule applies to rooms in the house — not the total occupancy of the house — and provided a PowerPoint from last spring outlining the restrictions.

“We can have 10 in our sports den, 10 in our social room, and 10 in our weight room which is not a weight room at night,” De Sousa-Vieira said. “The university, the town of Amherst, and our Grand Chapter have access to this PowerPoint.”

Outside the fraternity house, one student who was clearly inebriated shouted, asking those nearby for directions to her dorm.

“Do you know how to get back to Pierpont?” said the young woman, who identified herself as a freshman.

On Monday and Tuesday following the parties, Phi Sigma Kappa brothers partnered with the University to help enforce COVID-19 health guidelines, according to an Instagram post from the fraternity.

“Make sure to get tested twice a week, wear a mask, wash your hands, and practice safe six!” the post reads.

University officials did not immediately respond for comment on either gathering.

Reporters saw a heavy police presence outside both fraternities for much of the night. One UMass police officer near Phi Sigma Kappa told reporters the department knew of the gatherings, but couldn’t shut them down because the houses are in the Amherst Police Department’s jurisdiction.

Amherst police are limited in how they can respond to large gatherings. Complaints related to COVID-19 are directed to the town hotline, and a COVID-19 ambassador responds to noise complaints, according to Amherst Police Chief Scott P. Livingstone.

“We did respond to a noise complaint at that fraternity last weekend,” Livingstone said in a phone interview, referring to Alpha Sigma Phi.

When police respond to a complaint, “it’s mostly educational, reminding people what the guidelines are,” Livingstone said. “It’s not punitive.”

Other possible punishments include a verbal warning, a town bylaw citation or arrest, he said.

The gatherings at the two fraternities happened two weeks after the Daily Collegian reported that Theta Chi, a fraternity next to Phi Sigma Kappa, had hosted back-to-back parties the weekend after thousands of students returned to campus. Since then, the fraternity has been placed on interim suspension pending an investigation by the University.

On Monday, when asked whether any fraternity parties were reported or if any fraternities are under investigation, UMass officials did not specify and instead explained the action students can take if concerned about parties.

“Students who have concerns about any parties that occurred this weekend can file a complaint with the Dean of Students Office who will conduct a thorough investigation,” said Mary Dettloff, a school spokesperson, in an email.

Fraternity parties in recent weeks have been commonplace, according to the member in sorority leadership and a longtime town resident, who both live in the same neighborhood as many of the fraternity houses.

“They don’t seem to have any concern about getting COVID themselves or that others might get it,” said the resident, who has lived in the area for decades.

Overall, the neighborhood has been more pleasant than years past, the neighbor said. But she still sees broken glass on the street from alcohol containers, crowds of people entering and leaving houses they don’t live in, and large gatherings where students don’t wear masks.

“I’ve seen students forever and I understand students,” she said. “You would think the University would have a clue or two about the students, but evidently not.”

The member in sorority leadership named several other fraternities in the area that she said had hosted weekly parties which break health guidelines. The Daily Collegian could not independently confirm these parties.

“I understand if you want life to go back to normal, but the parties will be even better if you save the parties for when we can do it safely,” the sorority member said.

In a statement following the publication of this article, the Panhellenic Council, which governs eight sororities at UMass, said that members who have attended gatherings that break COVID-19 guidelines have been held accountable.

“The women in our council who make the decision to attend gatherings represent a small fraction of our community,” the statement said. 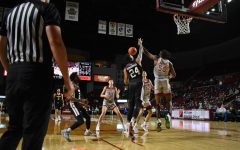 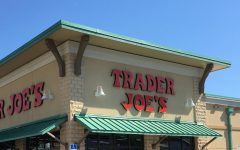 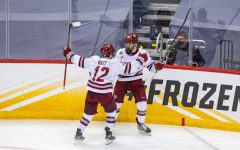 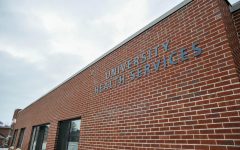 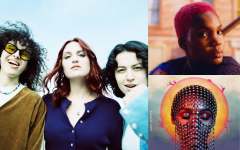 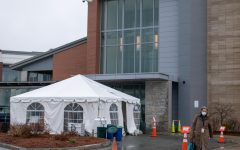 The UMass mask mandate should have been lifted differently 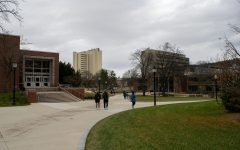 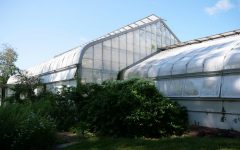 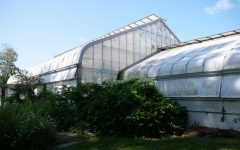 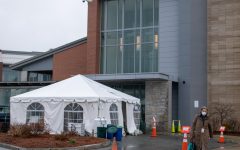