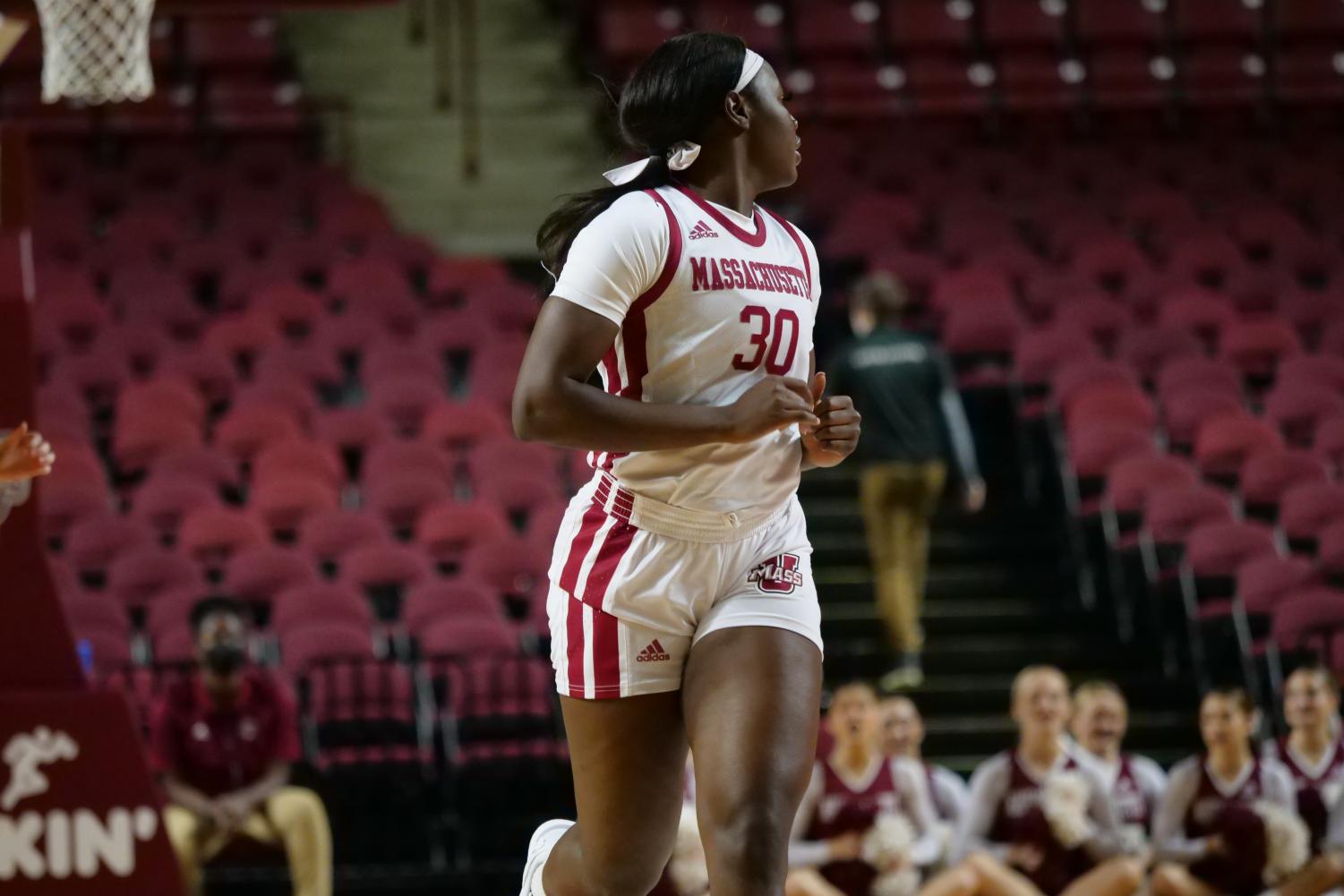 Grow as you go: Angelique Ngalakulondi’s journey at UMass

Hard work allowed her to write her own story

The sun often shines through the clear windows and off the grey exterior of the John Francis Kennedy Champions Center. The Massachusetts women’s basketball team stumbles in on a crisp December afternoon. Routine set already, ordinary every day rituals begin to occur.

Up the stairs, past the weight room and above the practice court sits head coach Tory Verdi’s office. In preparation for UMass’ game against Boston College, routine was necessary. The Minutewomen run a systematic program. Routines fall into that mindset. Days before the Eagles flew to Amherst, Verdi changed his routine.

It started with a text message.

Anxiety set in. Ngalakulondi had no idea what was behind that text.

Verdi told Ngalakulondi that she would be starting on Wednesday against Boston College.

The morning of Dec. 9, 2021, Ngalakulondi switched up her routine as well. She had one extra text message to send. Knowing that her parents wouldn’t be in Amherst for the game that night, she sent a text message to them with the news. While they watched via stream from New Hampshire, the fans in the Mullins Center heard the announcer call No. 30 and Ngalakulondi’s name for the first time.

In March 2021, the fifth spot opened in the starting lineup. Following the disappearance of players right before the Atlantic-10 tournament, Makennah White and Ngalakulondi were tasked to share time on the biggest stage. Neither of the two saw the floor much prior to the playoff tournament and instead only flirted with the idea of big minutes, mainly remaining on the bench.

Until tournament play, Ngalakulondi had six total points on the season. Two points across each of three games and no more than 10 minutes played.

In the A-10 championship game against VCU, Ngalakulondi had 17 points in the first half and finished with 19. Rebounding turned out to be a struggle for the Minutewomen in the 2020-21 season, often losing the battle on the boards. Against the Rams, Ngalakulondi snagged nine of her own rebounds and seven of them came from the offensive end. In the game, she also had three blocks.

A coming out party some would say. Or the classic tale of the “benchwarmer” putting up big numbers in the latter half of the season. The underdog trope, maybe.

Ngalakulondi didn’t see it that way.

“I just want to pick up where I left off,” Ngalakulondi said of her mindset after that game. “Move on, take no steps backwards and do whatever I could to keep moving forward.”

So, she formed her own routine. The jump from sophomore to junior year was bound to be crucial and a keystone to her career in total at UMass.

It started with lifting, improving strength and endurance. Summer mornings were spent in the gym and in the few short months before summer basketball officially started, it was Ngalakulondi’s job to work out on her own. Once the physical improvements were made and strength production occurred, it was time to connect that to the game of basketball. Stronger arms meant the ability to outrebound opponents. It increased her abilities down low, under the basket to fight through traffic and score while also being a wall on the opposite end.

Ngalakulondi created a consistent name for herself in terms of rebounding, slotting naturally into the missing puzzle piece that plagued the Minutewomen last season.

“Rim running, running the floor, and we’re able to hit her on the run for layups,” Verdi said. “Her running the floor offensively puts so much pressure on the defense, that even if she doesn’t get the ball, it opens up things for everyone else.”

Whistle blows, Destiney Philoxy gets fouled. Ngalakulondi waits on the line. Her defender looks down, recognizing that she has a height advantage. All she needs to do is step in front and box out Ngalakulondi and secure the board off a Philoxy miss. Or so she thought.

The ball rims out. Ngalakulondi’s defender steps in front but the ball doesn’t land in her hands. Ngalakulondi extends her arms, using only her upper body to cleanly grab the ball without fouling. Once secured, she goes up for her own layup, often converting a 3-point play after her defender scrambles to alter her shot.

“I don’t know if anything rattles her,” Verdi said. “I don’t really know because she has the same expression all the time. If she makes a mistake on the court she’s just like ‘I know, I gotcha.’ She is just in tuned and listening.”

Good or bad, her facial expressions reflect a calm mentality. But that wasn’t always the case.

During the fall of her freshman year, Ngalakulondi took time off. Needs outside of basketball had to become a priority. Instead of struggling while managing both, she decided to get a sturdy hold on the mental side of things. Despite the time out of a Minutewomen uniform, her relationship with Verdi and the staff was consistent.

“I continued the dialogue with her throughout the winter months and we spoke at length,” Verdi said. “And I always kept her updated about everything that was going on in our program. And I told her I wanted to continue to coach her.”

Though details remain personal for Ngalakulondi, the deep appreciation she has for the care that Verdi expressed made the process that much easier.

“Verdi has always had my back through it, encouraging me and having my back no matter what,” Ngalakulondi said. “He has played a huge role in this process.”

Student athlete life requires a vast adjustment. What were once young girls deciding which high school to attend turns into living on their own, taking care of themselves while competing at the highest level day in and day out. Four years spent creating a sense of home and familiarity transforms into a new story at college.

Born in The Democratic Republic of the Congo, Ngalakulondi moved with her family in between the age of four and five to New Hampshire. Since then, she’s lived in the Northeast her entire life.

Located in Andover, New Hampshire, surrounded by greenery and mountains sits Proctor Academy. Funneling student athletes and dedicated students grades nine through 12, Ngalakulondi found her home. But when deciding on high school, it had nothing to do with basketball.

“To be honest from the start it was the education piece of it,” Ngalakulondi said. “Everything I needed was in one space.”

Smaller classrooms, one-on-one connections with teachers and team-based learning was at the forefront of the school’s priorities, and that fit Ngalakulondi’s needs. The top-tier educational experience allowed her to flourish as a player. She was named the 2018 New Hampshire Gatorade Player of the Year and in 2017-18, she had averages of 24.5 points, 13 rebounds and 3.6 blocks per game. UMass caught notice and that sense of care ultimately bode well for adding Ngalakulondi to a roster spot.

“The relationship I had with the coaches,” Ngalakulondi said of what brought her to UMass. “They were always checking up on me, making the drive to Proctor from UMass. Proctor is in the middle of nowhere and a long drive, so I just knew they were invested in me. The connection with them, seeing how the relationships were between coaches and players really made that decision easy for me.”

The atmosphere in Amherst differs greatly from New Hampshire. A large public school was a major adjustment after coming from a small private campus.

It was a hard transition for Ngalakulondi, but she learned to adjust. She frequented professors’ office hours to make large lectures feel intimate, she spent more time getting to know professors and made sure to ask lots of questions.

“Passive. Insecure. Unsure,” Verdi said of words to describe Ngalakulondi when she first arrived on campus. “This new experience for Ang was something that I am not sure if she was ready for. Everyone has different maturation processes and for Ang, it was different. Being away from home … was difficult for her.”

Upon returning to the program, Ngalakulondi was a better and new version of herself. Her goals before coming to UMass were to impact the team in any way she could. And those goals remain.

“Outside of basketball I was working on it a lot,” Ngalakulondi said. “Once I got that down and fixed all that, it was easier to be mentally locked in on the court. I could see it and I know my teammates and coaches could also.”

Since BC, Ngalakulondi has started every game. That routine has yet to be altered. Averaging nine points and five rebounds, Ngalakulondi has formed an offensive and defensive unit around her, rather than stepping into something pre-made. She is a competitor. She knows how she wants to be coached and communicates that to Verdi and his staff. Talking things out and crystal-clear communication is what she thrives off.

“I think that Ang has been surrounded by people who care about her, and I think that she has been allowed to grow from her mistakes and understand that it’s okay to make mistakes and it’s going to be a process,” Verdi said.

Verdi learned a lot from Ngalakulondi. He feels he is now a more patient, attentive peer in the program. He goes down the line, asking each player how they are at every practice. Some conversations longer than others but the central goal is to check in on a personal level with everyone.

Now, he’d describe her as:

“Confident. Joyful. Enjoying her collegiate experience both on and off the court. Fun. Loving. Just confident in who she is.”

UMass is hungry for a return to the A-10 championship, with a different outcome this time around. Following the loss in 2021, Ngalakulondi said “We’re not done yet, we have a lot more we can do.” As for the present and future, she wants to continue to make that impact on the program, one she has waited to do since arriving on campus.

“I think that her best basketball is ahead of her,” Verdi said.

Lulu Kesin can be reached at [email protected] or followed on Twitter @Lulukesin.