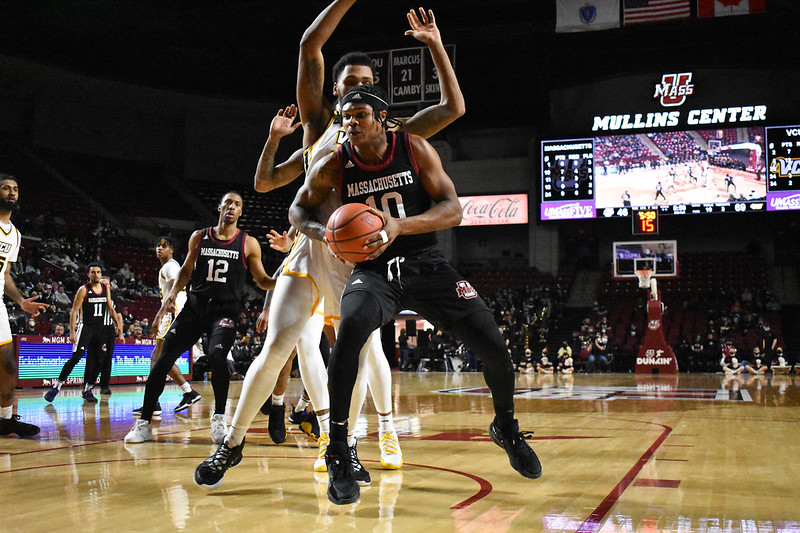 The straining path that led Jones to UMass

Greg Jones subbed in six minutes into the game for James Madison and immediately contributed with a layup. A couple possessions later, Jones stripped the ball off a Hofstra player at the top of the key.

“Greg Jones!” the play-by-play announcer said as the sophomore stole the ball. “Jones, behind-the-back dribble, goes for a strong layup on its way… good! What a smooth move by Greg Jones!”

Eight minutes after checking in, Jones headed back to the bench and stayed there until the end of the game.

A Bronx, New York native, Jones went to high school in Virginia and began his college career in state at James Madison. There, he started in 13 out of 64 games over two seasons and had one double-digit scoring game.

“[The lack of minutes] was sad at first,” Jones said. “But I came to terms with me not playing, so seeing my brothers play was good enough for me. I knew I could help but I was just looking forward to whatever was after the season.”

At that moment, Jones knew his future with the Dukes was bleak. A courtside view isn’t the same when for a player compared to a fan. Self-doubt had a seat right next Jones on the bench. He averaged 2.2 points and 2.5 rebounds in two years with James Madison.

With his season over and a tough decision to make, Jones turned to his childhood best friend Levar Allen, who recently graduated high school. Jones decided that wherever Allen went, he would follow. Allen chose the Division-II school Southern Connecticut State. Jones made an official decision the next week to join him.

“[Jones] always was the big brother that I always wanted, because I never had a big brother,” Allen said. “So he was always there when I needed someone. He’s always been that dude since I met him when I was in eighth grade.”

Jones is three years older than Allen, the two spent every day together since he was in eighth grade all the way up to his freshman year of college at SCSU.

In January of 2020 SCSU faced Assumption College in a Northeast-10 regular season game. At halftime, the Owls were down six and Allen logged five minutes. He voiced his frustration of not getting enough playing time to Jones. This was familiar territory for Jones who faced the same situation at JMU.

Jones advised his friend to be ready for when his name was called, to be positive and stay focused. Allen hit a game-winning, buzzer-beating shot to beat Assumption that day.

Stepping down from D-I was a humbling experience and a reality check for Jones. He considered quitting basketball after his experience with James Madison. His confidence was torn and downgrading to D-II threw salt in the wound.

“My cousins were like ‘you got to keep going, you made it this far,’” Jones said. “I didn’t want to go D-II because I felt like it was a step back, basically I’m underachieving.”

For someone whose defining traits are hard work and perseverance, all Jones needed was an opportunity to be a major contributor and the freedom to use all his strengths.

“[Playing D-II] definitely was a lifesaving, integrating experience that helped me get my confidence back, made me the person I am today.”

Despite questioning his decision to go D-II, things were great in Jones’ first season with the Owls. He averaged 13.8 points and 7.6 rebounds per game, starting all 25 games. He was also named a captain soon after arriving.

Another confidence booster for Jones were the posters his new university put up across campus with a picture of him. Even though other teammates were there four or five years, the first-year member received the banners.

“They had his banner all over campus,” Jones’ mother Jennifer Mack said. “I said ‘Greg, I have to go drive all the way up there to see that in person for myself.’ I thought that was neat. I said, ‘who do you think you are?’ But he’s a very humble guy. He worked hard; these are the things you work hard for.”

Growing up in a tough neighborhood, Jones realized that he needed to get his priorities in line. Carving his own future would require a ton of work, especially in the classroom. Mack more than pulled her own weight in the upbringing of Jones. Her husband was in jail for most of Jones’ childhood, leaving her to be self-dependent.

From the beginning, Jones wasn’t your average 6-foot-2 12-year-old. Instead of hitting the court with his friends, he was hitting the books, drawing and working towards a tangible goal: straight A’s. That’s not to say he didn’t play sports or hang out with friends, but he took AP classes, joined the National Honor Society and graduated high school as class salutatorian with a 4.1 GPA.

“Greg is the type of kid — I guess I kind of instilled that in him — you just have to figure things out,” Mack said. “You can’t really soak and sit, you got to figure out, you got to keep pushing. Every day, you have to get up and try.”

When his father came home from jail, Jones was in eighth grade. He noticed his 6-foot-4 eighth grade son wasn’t playing any sports. He made Jones go to the basketball court and helped him try to touch the rim and make layups for hours.

His father was the spark that initiated his journey in basketball. The following year, Jones’ love for the sport blossomed. He won a state championship in his freshman year at John Marshall High School in Virginia, and in his senior year was crowned East region player of the year in his conference.

Aside from basketball, Jones kept good grades at James Madison and elevated them at Southern Connecticut State, where he made the Dean’s list and was named to the Northeast-10 All-Academic team in both of his years at the school.

Mack is glad her son has succeeded in basketball, but cares much more about his academic accomplishments. As a first-generation college student, Jones is breaking barriers graduating from UMass in May. His mother never went to college and his father went, but never finished.

Mack raised her son in an environment with many distractions and “things he could’ve gotten caught up with,” but says Jones stayed focused. Little did she know her smile was his motivation all along.

“For me I always put school first because I started hooping in like eighth grade, so I didn’t have a young experience and a great time playing basketball growing up,” Jones said. “All I had was my books… I took pride in making sure my grades were good. Just seeing my mom smile made me want to do it every day.”

Things were trending upwards as Jones worked hard to recover his confidence and was close to making a comeback to D-I, but COVID-19 put a halt on everything. Once again Jones contemplated his future in basketball.

Day-to-day life during the pandemic wasn’t easy. After the season was canceled, he and his teammates were told they would have two or three scheduled games coming up, eventually getting canceled every time.

Jones did nothing all year but work out and hope for games. His impatience and desire to transfer grew and he fell into a rut again. Two people guided him through the struggle: his mother and then-assistant coach at UMass, Brian Grossman.

To this day, Jones’ mother texts him every morning with affirmations to keep him in a good spirit. Grossman did much of the same during the pandemic. Him and Jones talked every day throughout the recruiting process, Grossman sent Jones little pieces of advice, also checking in to make sure he was doing alright.

“I went through a little bit of a depressive state at JMU, got my confidence back at Southern Connecticut, and then for me not to play that year, it kind of took a toll on me,” Jones said. “It was kind of looking like I was about to give up on ball. But talking to [Grossman] and all that.”

“I was on my last straw. Boy, oh boy, [Grossman] came through for me.”

Grossman has known Jones’ high school coach Ty White for a long time. When Jones was looking to transfer back into D-I following the canceled season, White learned of this and reached out to Grossman at UMass to put in a good word for his ex-player.

Jones chose to become a Minutemen for more than just Brian Grossman. He still had family in New York and the proximity allowed them to visit and watch games. The then-D-II player was also attracted to the Atlantic-10 conference, a much bigger stage than any he’d ever played in before.

The coaching staff was the deciding factor for him. UMass head coach Matt McCall called Jones while on vacation to discuss working together, and by then Grossman had been talking to him every day. Jones felt wanted and included from the jump.

When Jones and Allen went home during the pandemic, they were at the gym every day, and all the time Jones would talk about playing D-I basketball again after leaving Southern Connecticut State. Now in the blink of an eye, he was back in D-I.

“When anyone would come to the gym they’d be like ‘wow, that kid’s loud. [Jones has] great energy,’” Grossman said. “It’s almost like a contagious thing. When he’s up, the team’s up and they feed off of it.”

His energy stayed high for the Minutemen without nearly the same role he had at SCSU. Jones adapted and became a patient and opportunistic player. He made the most out of his minutes, becoming a “glue-guy” and built upon the relentless nature of his game.

One of the newest UMass additions quickly earned McCall and his teammates’ trust. Jones brought much needed versatility to the Minutemen both as an interior defender and one who steps out for threes consistently.

In UMass’ win over Saint Joseph’s in February, Jones grimaced and held his hurt hand during an offensive possession midway through the second half. He couldn’t sub out of the game because it wasn’t a dead ball.

Jones found himself in a battle with a St. Joe’s forward as the ball hit the rim and flew in his direction. He fought to box out his man and positioned himself for the long rebound near the short corner, grabbing the ball with his only functional hand. UMass called a timeout and Jones subbed out of the game behind a loud applause by the crowd.

“I outwork everybody, even if you got one hand, one hand is going to work,” Jones said. “You’ll get your break when the time comes, but until then you can’t stop, just like you’re in a war, you get hurt one time you can’t just stop and roll over, you got to keep going until you finally get your break.”

After a collegiate journey elongated by emotionally taxing stages, Jones will get his break in the form of a college degree. From limited playing time at James Madison to downgrading to D-II and getting his season canceled, Jones finishes his path with the Minutemen.

“I would say it’s a dream come true in a way because I made it back into D-I and became a vital part of the team,” Jones said. “The love from the fans and my teammates made this experience amazing. I feel that I came into this situation as the underdog from D-II to being respected by teammates and competitors.”

Pedro Gray Soares can be reached at [email protected] and followed on Twitter @P_GraySoares.